The life-changing magic of crafting your compelling career story 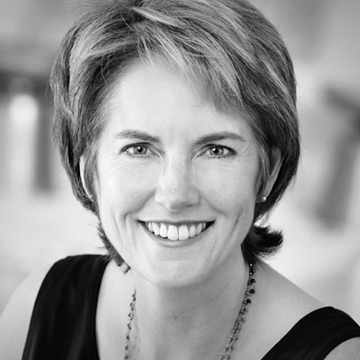 I received some big news this past week:

Congratulations! Your application for the designation of Master Certified Coach (MCC) has been examined by the ICF and approved. You should feel proud of your accomplishment and this major milestone in your career as a professional coach.

…And I immediately burst into tears.

This accomplishment came after four LOOOONG years of work. Hard work. Frustrating work. Work I believed in, more, even than the credential itself.

Coaching is in my very DNA. There is no doubt that this is my passion. But the journey toward achieving the credential took quite a few years to pursue and led to many moments of self-doubt, questioning, fear, and anger.

From the outset of my foray into coaching years ago, I set my aim on achieving the pinnacle: the designation of Master Coach. The International Coach Federation (ICF) offers a three-level credentialing process to acquire their highest recognition: Associate-level, then Professional-level, and finally Master-level designation. I expected it would take me about 10 years to achieve all three. In fact, it took me almost 14 years. If I had known what I would have to go through to achieve it, I would have been daunted, to say the least.

The first obstacle along my journey came when I learned that my chosen school, John F. Kennedy University, was not accredited by the ICF, something I learned long after I had enrolled. This meant I needed to jump through more hoops than candidates who attend accredited schools, proving not only my own ability and skill as a coach but also the school’s teaching of the appropriate coaching curriculum. To achieve Master level, I had to:

I waded dutifully through the coaching log, something that took many hours to compile and collate. I studied for and passed the written exam and also passed a corresponding ethics course with flying colors. The sample coach recordings, however, proved elusive. I worked with three different mentor coaches over the years to help me refine my coaching approach, submitting recordings to them and receiving feedback on where I wasn’t going deep enough, wasn’t asking powerful enough questions, where I was talking too much or driving the agenda for the client instead of the other way around. Initially, I bucked the feedback from my mentors and assessors, but eventually, it started to sink in that by leaving my own insecurities at the door, this journey provided an opportunity for me to help people transform their lives on a more profound scale.

I submitted to the ICF several recordings that my mentor coaches and I deemed worthy, and each time months later I received emailed notification that they did not meet MCC standards.

It was always a painful blow to read those emails.

After the second or third round of my recordings failing, I received a bouquet of flowers from my business coach with a card that I kept on my desk.

No external NO can match an internal YES.

What a concept. I began to see that there was a life lesson here to learn, much deeper than any I had imagined before. It was humbling to realize that I was pursuing this designation as outer proof of my abilities, instead of realizing that I alone could approve of myself, and that that inner approval was more powerful than any external achievement.

With that realization, I seriously considered giving up my goal. Perhaps the lesson here was that I didn’t need to prove to anyone that I was good at what I did? I marinated in that option for a while.

However, a niggly thought kept resurfacing for me: I found myself curious about whether there was something for me to learn here to not only enable me to become a more skilled practitioner, but to become a more evolved human being. This curiosity sustained me during my darkest moments and gave me the energy to continue.

One thing I have learned about myself over the years is that, underneath the surface, I carry a lot of rage.

During the credentialing process, the rage came out of hiding. I met others who had failed to achieve their MCC after one or more tries. I learned that a good percentage of candidates fail the first time and many fail repeatedly. I began to feel both in good company but also frustrated that this process was so hard and evasive for so many, despite us being successful coaches.

For a long time, my anger crowded out my ability to truly receive the feedback I was given, both from my mentor coach and also from the assessors. By this time I was attending the annual Conversation Among Masters conference. Meant for MCC-level coaches, I quietly did a number on myself feeling like I didn’t deserve to be in the room, even though outwardly I tried not to show it. Rage around the process, rage at myself. It hurt.

Slowly, over time, I took a deep breath and relaxed. All the training I had undertaken to learn to coach others, I decided to turn on myself. I strove to detach from the outcome of achieving the credential. I began to see this as an opportunity to become a more highly evolved human being capable of better service to others by allowing them to tune into themselves. This shift in mindset helped me ingest the lessons my mentor coaches and assessors were giving me with more openness. Over time, this led to some transformational shifts in my coaching.

I began to consistently practice holding space for clients to enable them to find their own answers. I learned to probe more and to take risks to go deeper with openings in the conversation, openings that I had totally overlooked in the past. I discovered that by carefully asking permission and sharing my intuition, I would hit on something that allowed them to go deeper into themselves. By inviting silence into the conversation, even when it was uncomfortable for me, I found that my coaching began to take on a very different shape, one that felt lighter and deeper at the same time. Lighter for me in that I was not carrying the energetic burden for the client, but also deeper in that I was holding space for them to believe in their own ability to figure out how to navigate through their challenges.

The process helped me fall back in love with the craft of coaching.

One of my mentor coaches, within five minutes of meeting me, announced that she knew why I was failing. What she said next floored me:

“Master coaching is about surrender. You are failing because you are trying too hard.”

That hit deep. An achiever and highly productive person, the idea of letting go and letting something happen organically on its own is not the way I typically approach things. The concept of moving through by letting go is a life lesson that I continue to learn and re-learn, everyday of my life. I have learned that it is my undoing, and my salvation, at the same time.

The upside of being a productive, analytical person is that you can get a lot of things done and move through things logically and strategically. However, that approach misses the sweet happenstance of life, the deep knowing that we are all connected and that each person has their own answers within them. The learning is that my light is best shined by not-overextending for others, but by carefully and with empathy noticing what I observe and with permission, surfacing core issues underneath behaviors and words. This requires a deep belief in my inner knowing, and also in my client’s inner resourcefulness, as that is the wellspring from where true, lasting change comes.

With a deep breath, I waded into the water with my clients, allowing them to find their own way with me as their witness, being curious and content to stay with questions instead of rushing in with answers. I became engrossed in the learning process, and watched the world around me open up as I practiced these growing competencies in myself.

And then, just last week, I received word that I had finally passed.

Finding the email in my inbox, I clenched my teeth and opened the attachment, fully expecting a new rejection with – hopefully – more detailed comments about what I had failed to demonstrate this time.

Imagine my surprise and delight when I read, “Congratulations…”

And that’s when I burst into tears.

All the pent-up energy released from my body in one fell swoop. After a four-year journey, I had accomplished a major goal in my career and in my life. All the effort I had put into the achievement suddenly seemed worth it in light of how I felt for having persisted, grown, and come out the other side.

True, the tears were for being happy with the result and relieved to be done. However, they were also for my gratitude for the profound learnings I have had from this process. For my willingness to take a good look at myself and examine the limits of my thinking. And, to push beyond and learn new ways of being so that I can be of higher service to others.

Several people have asked me how I will celebrate my achievement.

Honestly, I feel I already have.

A designation is celebration in itself, for it reminds me of the personal growth the process has enabled me to achieve. Every time I see the initials “MCC” it is an opportunity for me to re-ground myself in the learnings and grow even more. 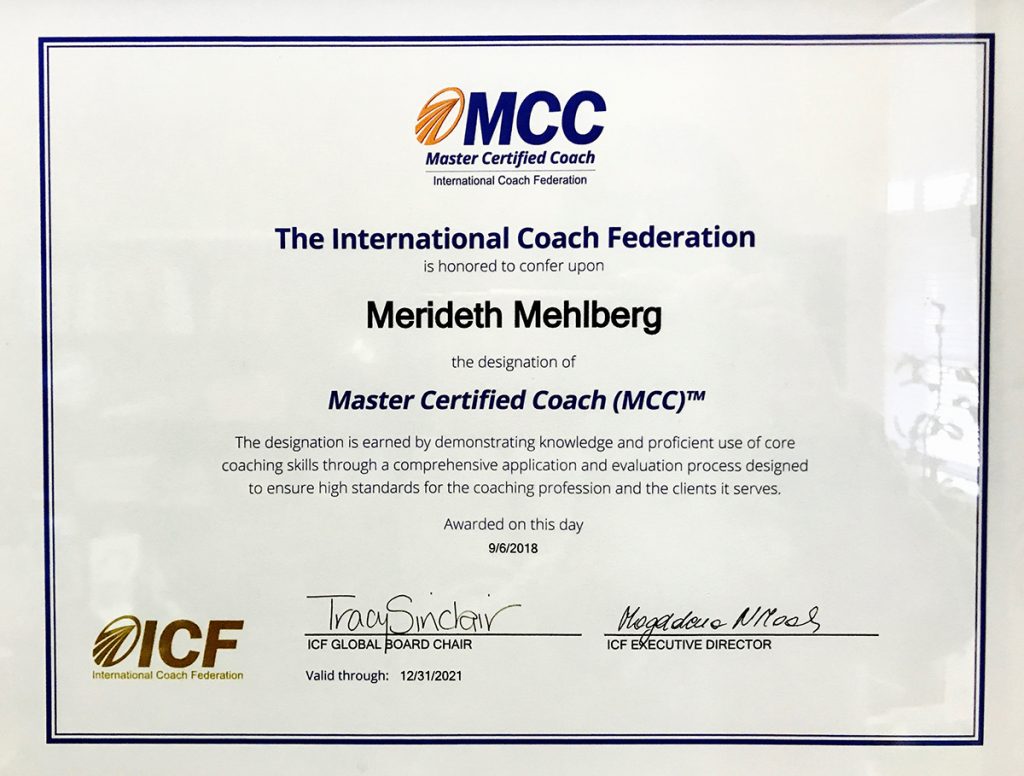 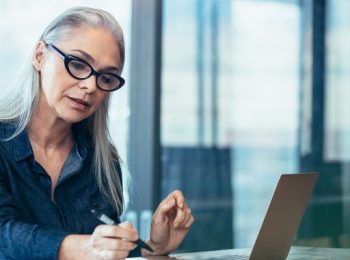 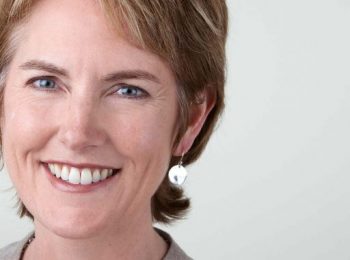 Listening to Your Inner Knowing 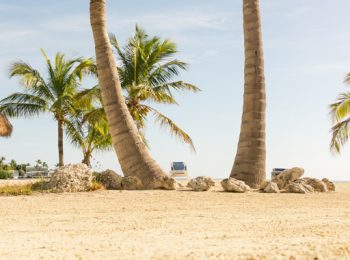 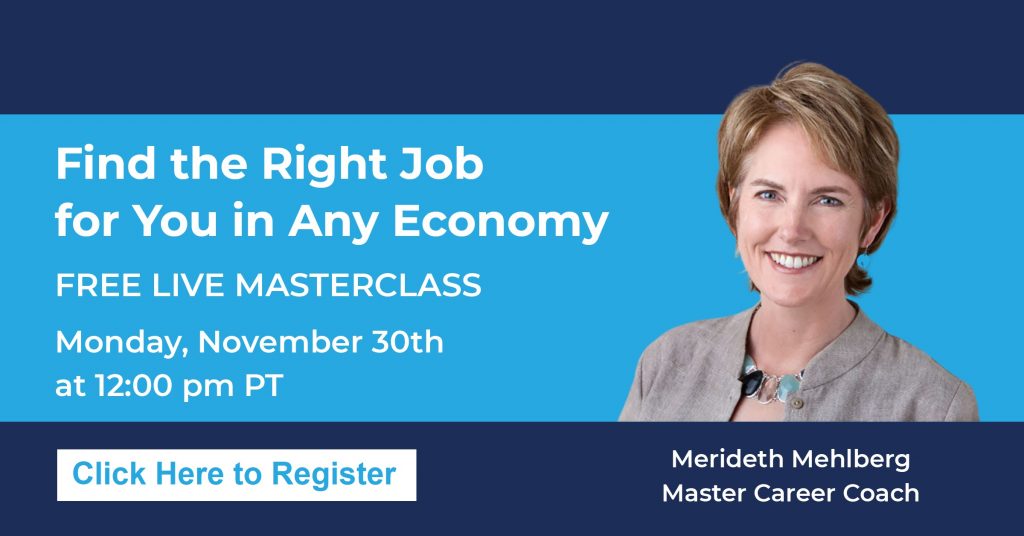